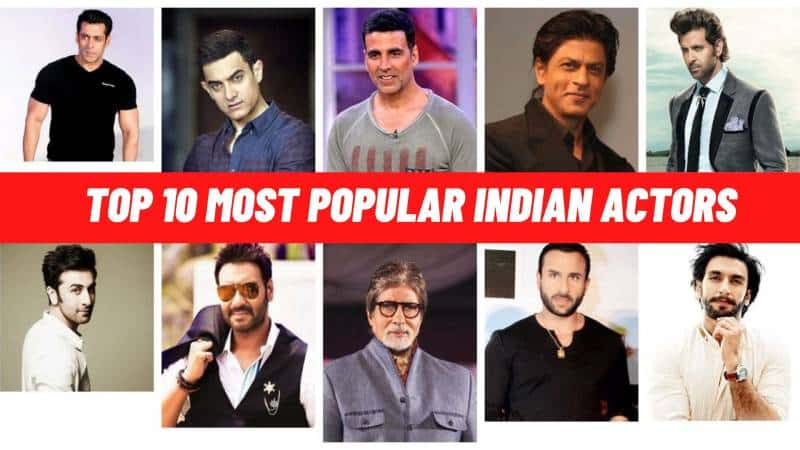 Top 10 Most Popular Indian Actors: There are many actors in India who entertain people with their best performances. Bollywood is currently the second most popular film industry in the world due to its talented actors. Some actors have made their place in the top 10 actors of India list.

The rumors of Bollywood celebrities are frequently discussed on social media. Do you want to know who are the most popular actors in Indian Film Industry? If yes, then let’s look out at the list of top 10 most popular Indian actors and feel free to give us your opinion in the comments section.

Shah Rukh Khan has made his name by playing outstanding romantic roles in various movies like DDLJ, Kuch Kuch Hota Hai, etc. He received 14 Film fare awards. He received a total of 297 awards including Padma Shri Puraskar. In 1991 he married with Gauri Khan. He made his debut with Deewana in 1992 and has not stopped since then.

Salman Khan is considered one of the most popular Indian actors. His full name is Abdul Rashid Salim Salman khan. He was born on 27th December 1965. He is popular as “Sallu Bhai” and “Bhaijaan” by his fans. Apart from being an actor, he is also a producer, television personality, singer and philanthropist. In 1988, he started his acting career with a supporting role in ‘Biwi Ho To Aisi’ . Furthermore, he has hosted the popular reality TV show “Bigg Boss”.

His full name is Amitabh Harivansh Rai Bachchan, was born on 11th October 1942 in Allahabad. He is known as  “Angry young man” & “Shahensha” of Bollywood. He made his debut in 1970 with the films ‘Zanjeer’ and ‘Deewar’. Since then he has done more than 150 movies. He also hosts the popular television show ‘Kaun Banega Crorepati’. He received many awards from the Government of India such as Padma Shri, Padma Bhushan, Padma Vibhushan, etc.

Aamir Khan is one of the most popular Indian actors, was born on 14th March 1965 in Mumbai, India. The full name of Aamir Khan is Mohammed Aamir Hussain Khan. Apart from being an actor, he is a producer and a great director. He worked as a child actor in the film ‘Yaadon Ki Baaraat’. His first film was ‘Holi’ in 1983. Apart from acting, he has participated in many social works. He started a television show “Satyamev Jayete “ which was a great success. He received awards like Padma Shri, Padma Bhushan, etc.

Akshay Kumar was born on September 9, 1967 in Amritsar, Punjab. His full name is Rajeev Hari Om Bhatia. He is widely known as Khiladi Kumar of Bollywood. He began his acting career in Indian Film Industry with the film “Saugandh”. On 17th January 2001, he married Twinkle Khanna. Apart from films, he has even worked as a stunt artist. He has received many awards including “The Asian Awards” for his contribution to Indian Cinema.

Another most popular Indian actors is Ranveer Singh. He made his debut with ‘Band Baja Baaraat’  in 2010. He was born on 06th July 1985 in Mumbai. After completing his graduation from Indiana University Bloomington, he returned to India to make a career in Indian Cinema. He did many successful films like Band Baaja Baaraat, Ladies vs Ricky Bahl, Padmaavat, Bajirao Mastani, etc.

Vishal Veeru Devgan was born on 02nd April 1969 in New Delhi, India. He started his career with the movie ‘Phool Aur Kaante’ in 1991. Besides as an actor, Ajay Devgan is a director, producer, husband, and also a father of two children. He has own his production company “Ajay Devgan Films“. He knot a tie with Kajol on February 24, 1999. He has honored with the Padma Shri by the Government of India.

The son of greatest Bollywood actress Sharmila Tagore, Saif Ali Khan was born on 16th August 1970 in New Delhi, India. He started hi career in the Indian cinema with Yash Chopra’s drama movie ‘Parampara’ in 1993. He became famous after the films ‘Yeh Dillagi’, & ‘Main Khiladi Tu Anari’. He earned the National Film Award for best actor for the film ‘Hum Tum’ in 2004. So, he has considered one of the most popular Indian actors.

Hrithik Roshan one of the popular actor was born on 10th January 1974 in Mumbai, India. He is the son of popular director Rakesh Roshan. He acted in several films as a child actor. He debuted with the Rakesh Roshan’s film ‘Kaho Naa… Pyaar Hai’ as a leading role and since then he has won six Filmfare Awards. He is considered one of the professional dancers.

Another most popular Indian actors is the son of Kapoor family, Ranbir Kapoor. He was born on 28th September 1982, in Mumbai. He made his debut with the film  ‘Saawariya’, which is a box office flop. He got Filmfare awards for best actor for the movies ‘Rockstar’ and comedy-drama ‘Barfi!’. After this he gave Blockbuster films like Yeh Jawaani Hai Deewani, Ae Dil Hai Mushkil, Sanju, etc. He is also considered to be one of the highest paid Bollywood actors in India.